On the grounds of London’s Lincoln’s Inn, between the hours of 8 and 11 in the morning, on May 22, 1623,  the Rt Rev George Montaigne, Bishop of London, conducted a worship service that constituted a service of consecration for Lincoln’s Inn’s newly constructed Trinity Chapel, opening it officially for use as a worship space by the members of the Inn.

The service Bishop Montaigne conducted consisted of the full morning set of rites, as directed by the rubrics of the Church of England’s Book of Common Prayer (1604), that is, Morning Prayer (or Mattins), the Great Litany, and Holy Communion.

While at the Inn, Donne had been instrumental in the planning, fund-raising, and construction of Trinity Chapel. One of Donne’s sermons from this period, we are told, was “Preached at Lincoln’s Inn, preparing them to build their Chapel.” In fact, Donne once claimed to have laid the cornerstone of the new building with his own hands. Donne’s contribution to the construction of Trinity Chapel is recorded in one of the chapel’s stained glass windows. Loosely translated, the Latin inscription reads, “I, John Donne, Dean of St Paul’s, caused this to be made.”

Donne’s transcript of his sermon survives, having been published by Donne soon after its delivery, Donne tells us, “in obedience to that which [members of the Inn] may call your request but I shall call your Commandment.”

The events of that morning were documented in a variety of venues and by a number of people.

The Archives of Lincoln’s Inn hold Bishop Montaigne’s Charter, or official account of the occasion. Also in the Archives is a detailed account of the Service of Consecration, including information about who spoke, and what they said, and where they stood at the time.

Also in the Archives are accounts of the construction in the Black Books of the Inn’s administrative meetings, as well as the Bill from Price the Joiner for construction of the interior furniture, which also includes information about where inside the Chapel the furniture was located. This information has made it possible to reconstruct the original floor plan of the Chapel. 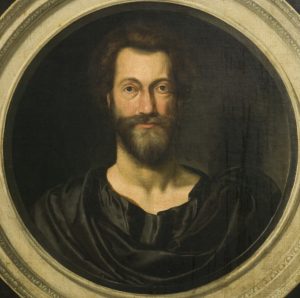 In addition, John Chamberlain reported on the Consecration service in a letter to his friend Dudley Carleton, dated May 30, 1623.

In addition to all this documentation of the Service of Consecration, Trinity Chapel itself is one of the most thoroughly documented buildings in the early modern period.

This documentation by visual record extends from 1623 (see image in the banner heading for this website, from stained glass in Trinity Chapel) to 1660 (Wenceslaus Hollar‘s birds-eye view, above left), to 1751 (George Vertue’s image, below), to the early 1800’s (See image to the immediate left), and beyond.

We have used all this data to reconstruct both exterior and interior models of Trinity Chapel as we believe it looked on May 22, 1623 at 10:00 in the morning.

The purpose of this website is to bring together a wide variety of materials documenting the worship service that took place on the grounds of Lincoln’s Inn, one of London’s Inns of Court, on May 22, 1623, during which the Rt Rev George Montaigne consecrated the newly-constructed Trinity Chapel for use as a site of worship by the residents of the Inn.

Unique to this event, there is both visual and written evidence of what took place.

Earlier versions of this work have appeared in John Donne Journal 26 (2007) as well as in Anglican and Episcopal History (2012), where it was awarded the Nelson Burr Prize in Church History by the Historical Society of the Episcopal Church in 2013.

This site adds to the work published in those journals new and additional materials bearing on the Consecration Service at Trinity Chapel, as well as Donne’s role in the service, and the social and political context for this event.